Many Fires Burn Below the Surface 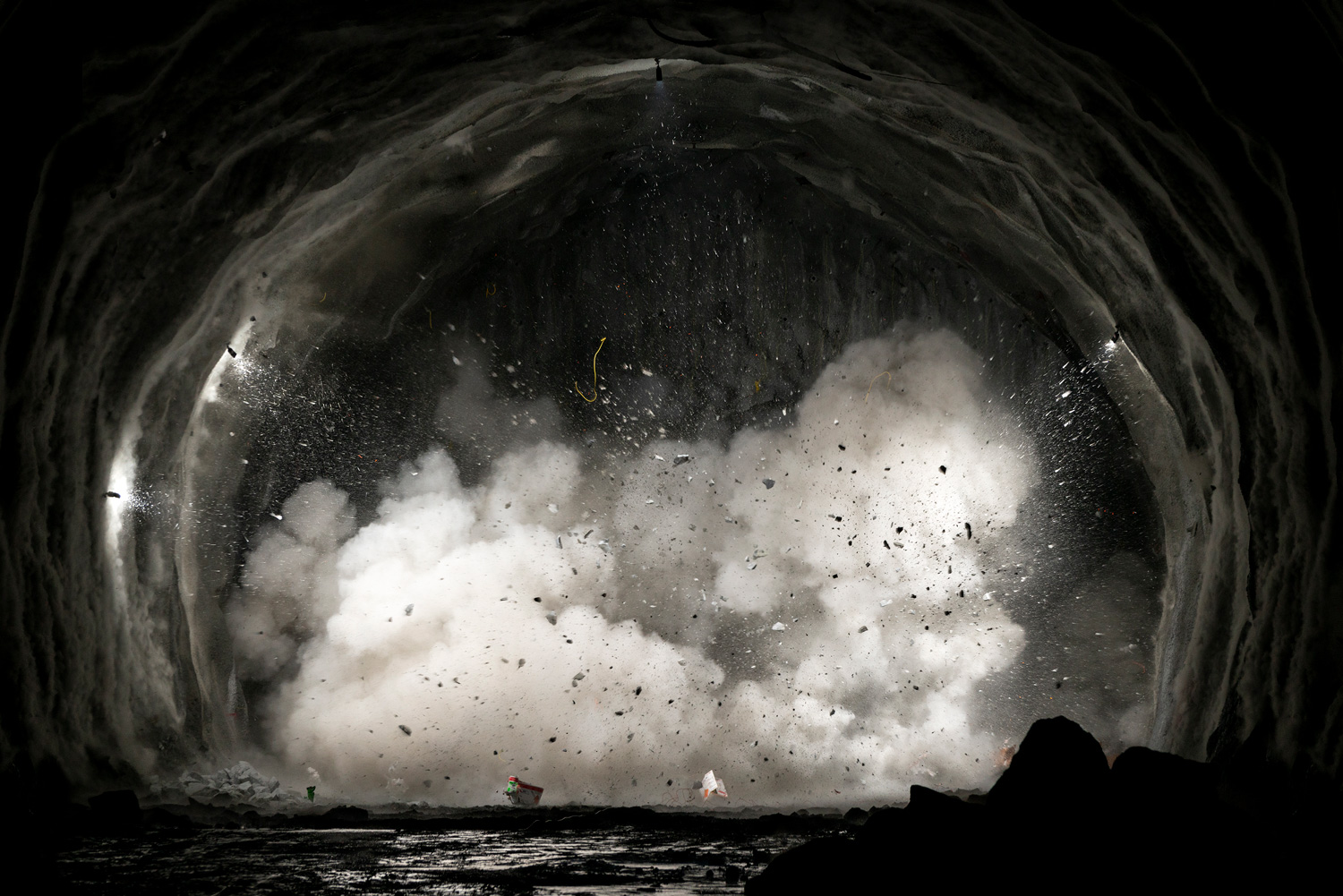 A photographic campaign, curated by Alessandro Dandini de Sylva and commissioned by Ghella spa – a company founded in 1894 and specialized in underground excavations for the realization of major infrastructure projects – published in the book Di roccia, fuochi e avventure sotterranee (Quodlibet, 2021) and exhibited in 2021 at MAXXI Museo Nazionale delle Arti del XXI Secolo in Rome.

The photographs taken by Andrea Botto in the construction site of the Brenner Base Tunnel, that will unite Italy to Austria beneath the Brenner Pass, present themselves as the summary of a performative action: the certified miner, the person authorized to handle the explosive, puts into scene a long succession of preparatory activities which culminate with the spectacular explosion of the excavation face. 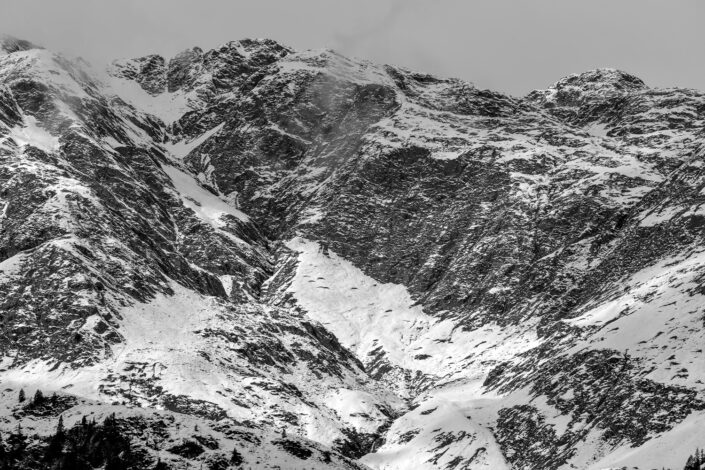 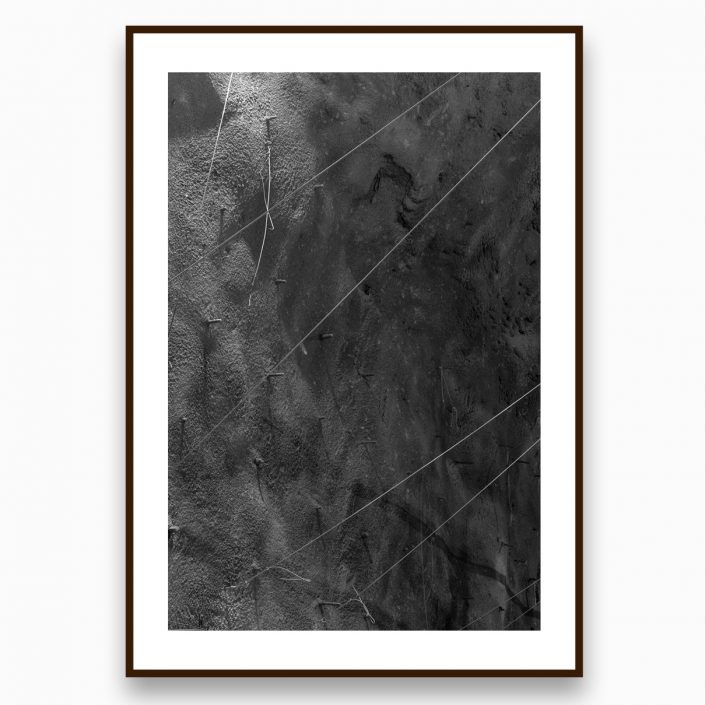 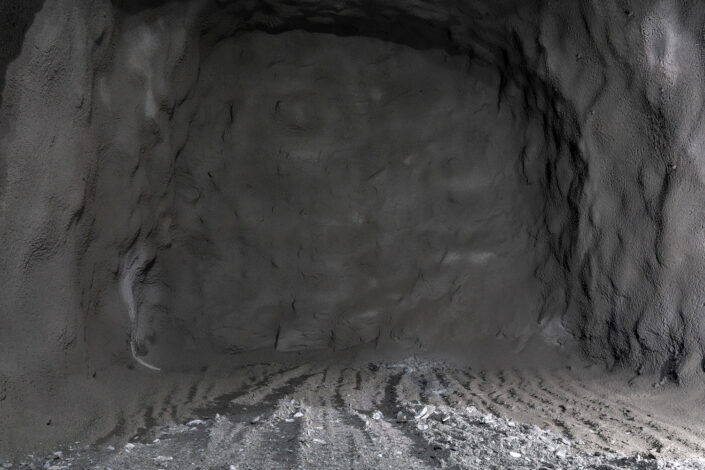 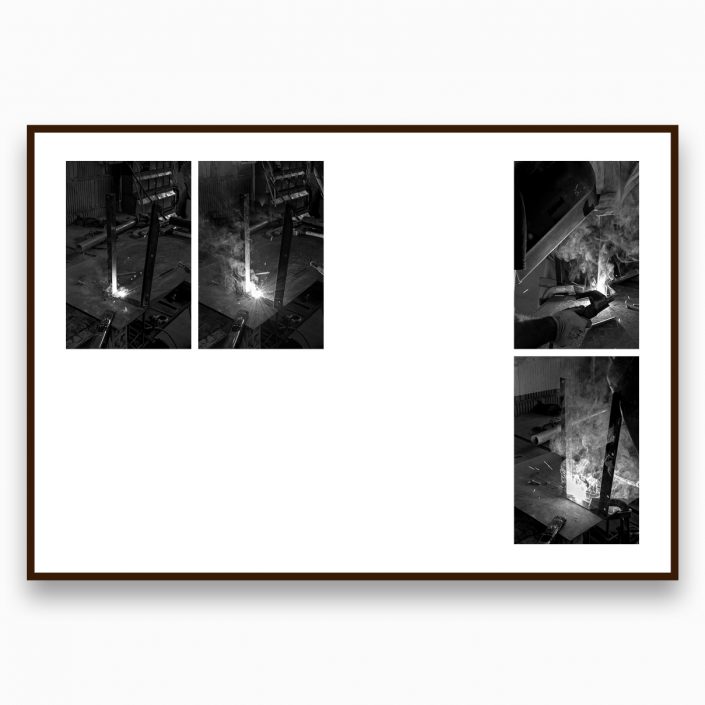 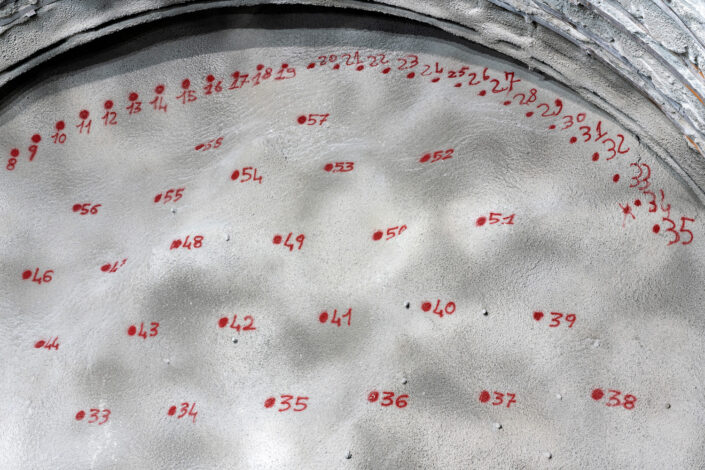 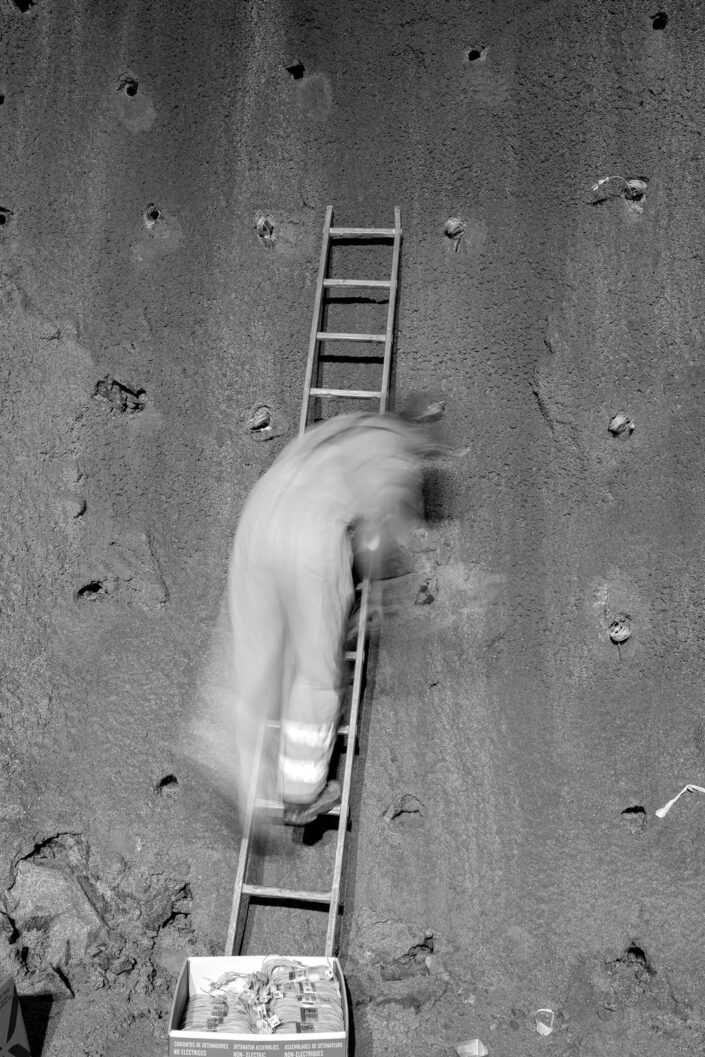 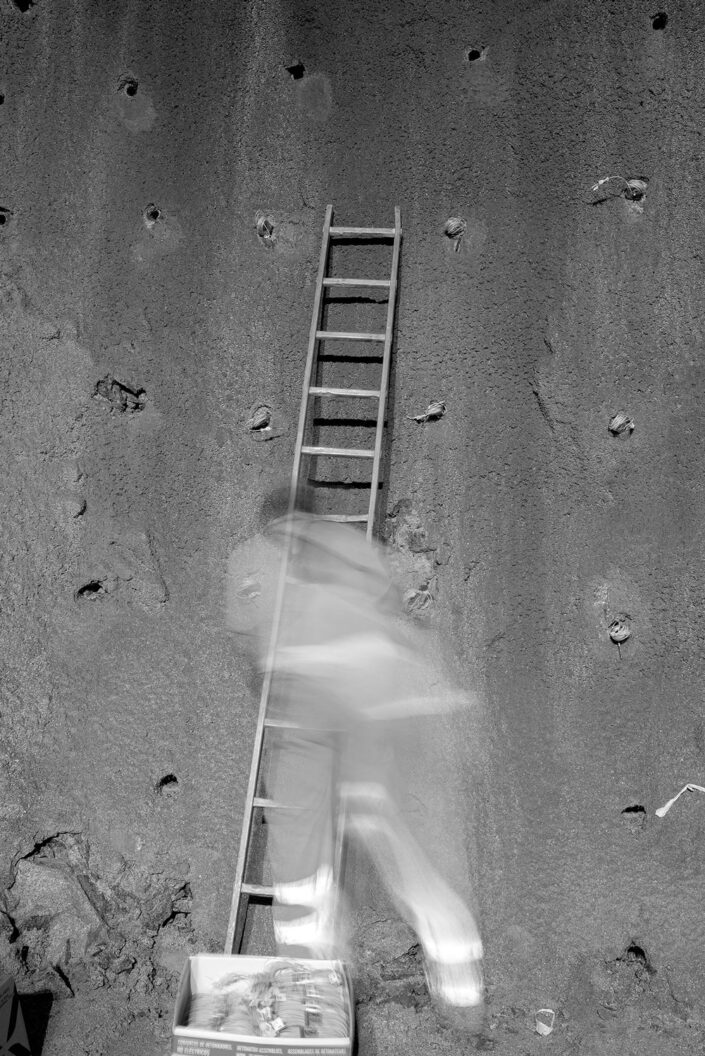 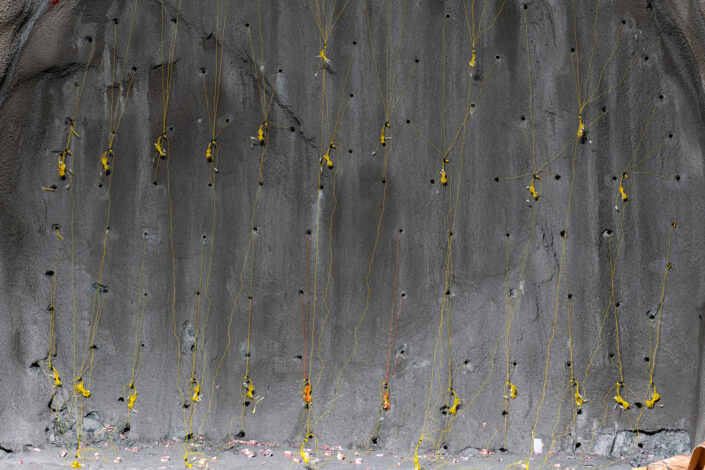 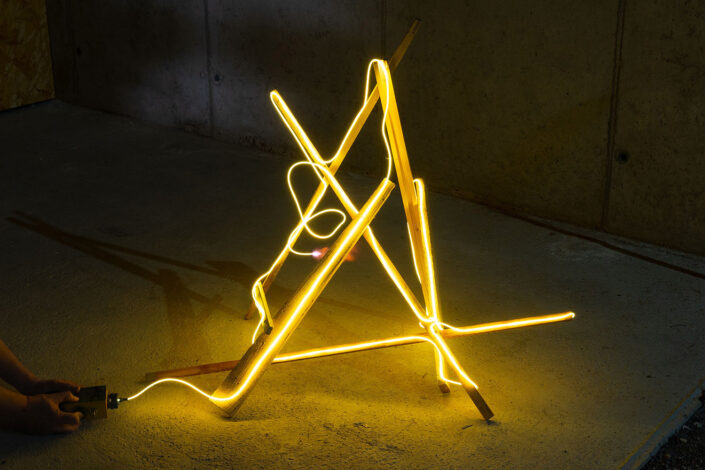 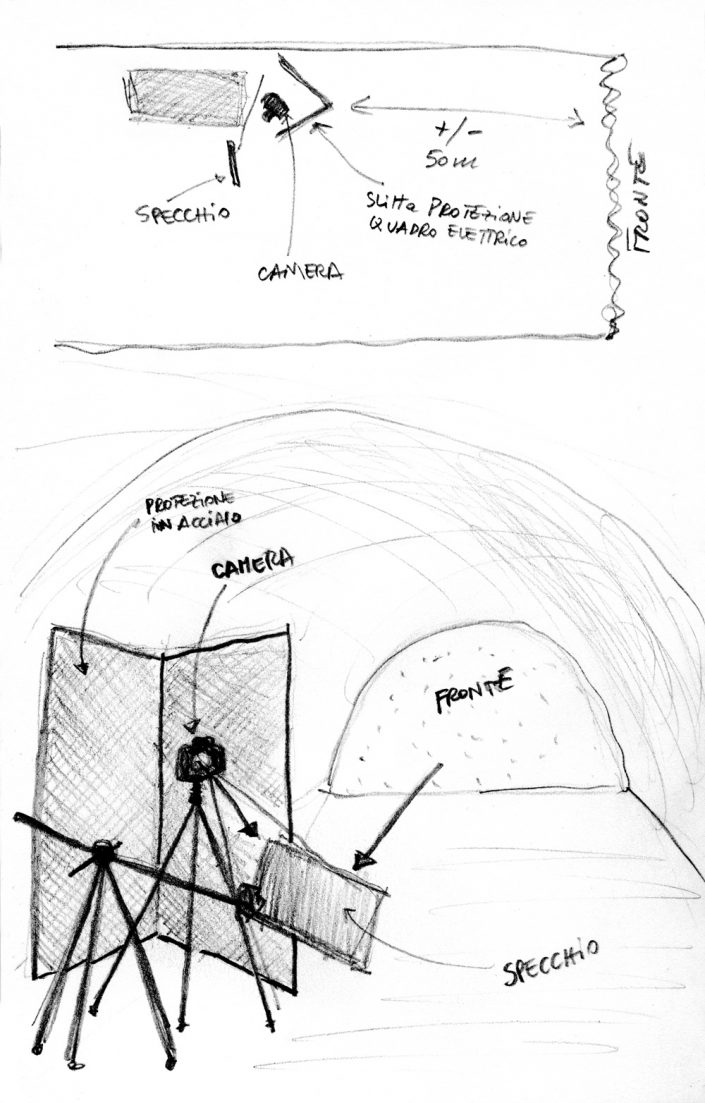 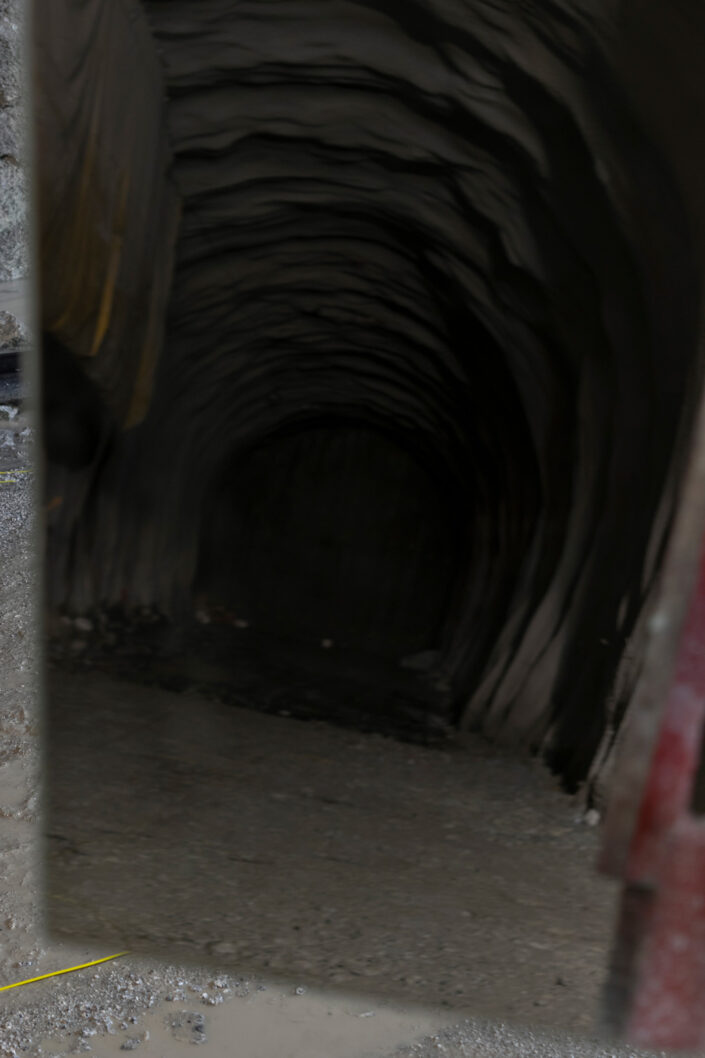 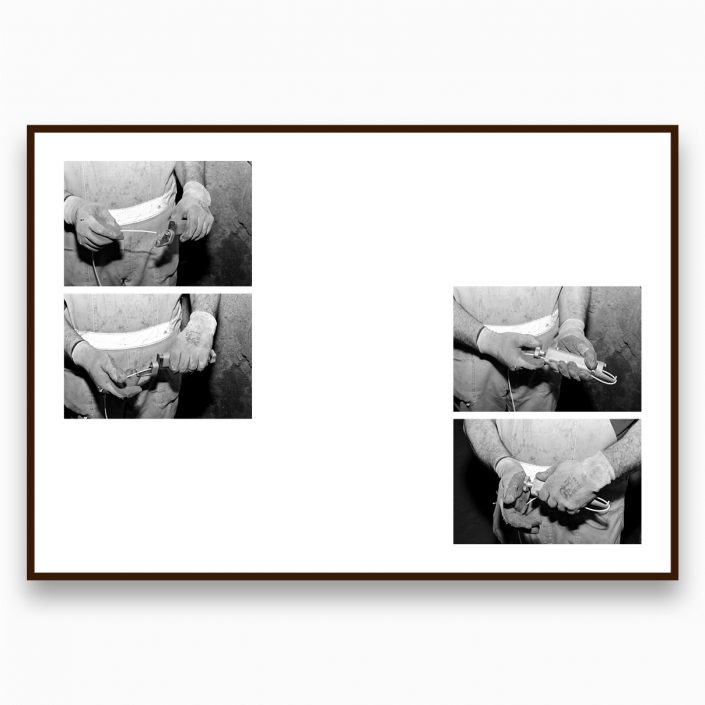 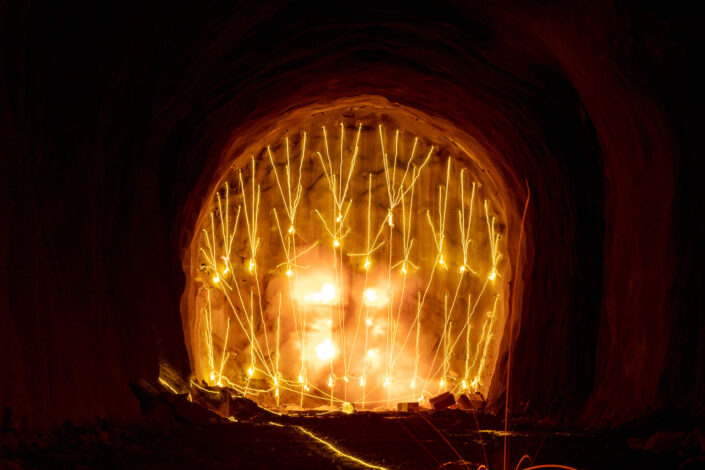 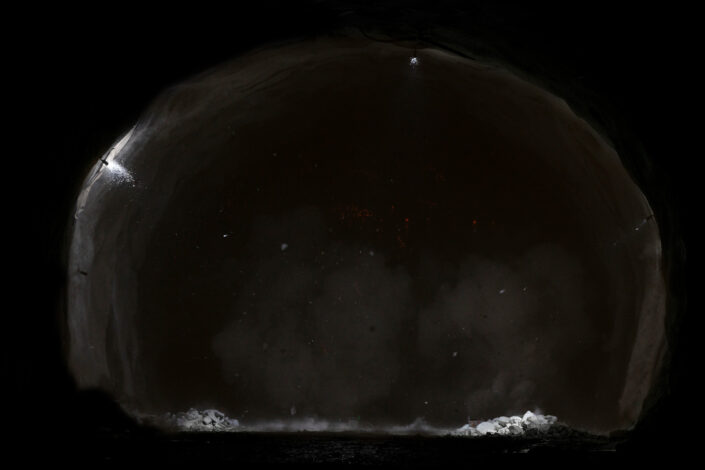 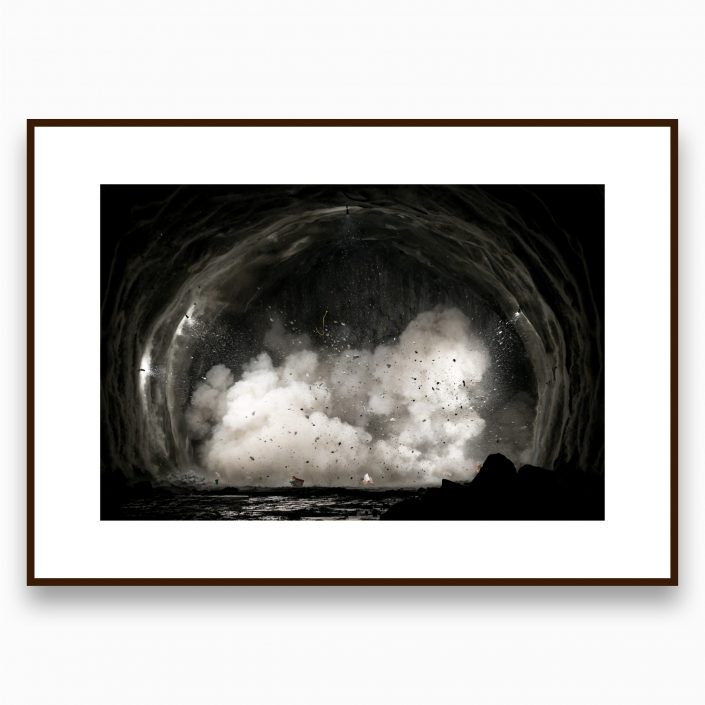 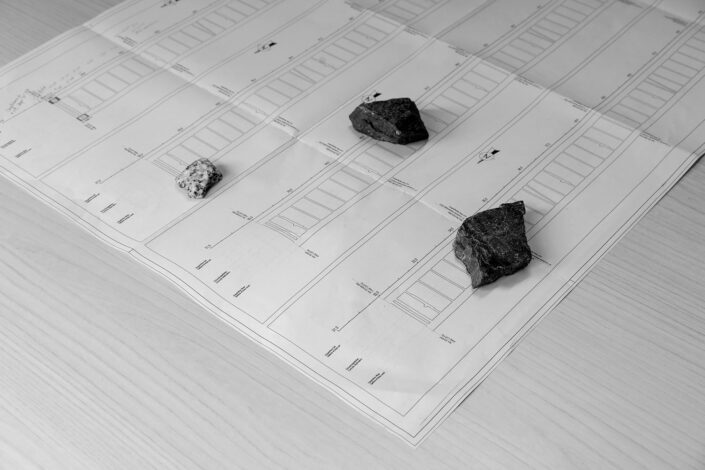 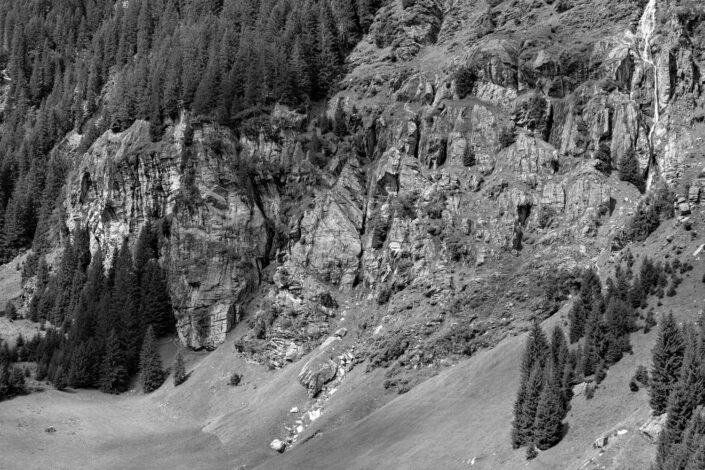 MANY FIRES BURN BELOW THE SURFACE

AD: The title chosen for this conversation comes from afar. It is fragment no. 40 from Empedocles’ Physical Poem: “Many fires burn below the surface”. An open-ended sentence in which we can find and recognize all the ideas that are present in your work on the Brenner Base Tunnel. Empedocles chose Mount Etna for his final experiment. You turned the blasting excavation in a tunnel into a unique series of visual experiments.

AB: You’re right, and it’s a beautiful quote, for which I thank you. The first time we talked about it, you had taken it from the title of a collection of essays by Marcello Carapezza, [1] Sicilian chemist, geologist, and volcanologist. Hence, the relationship with Empedocles, philosopher, physician, and scholar of natural phenomena who lived in Sicily in the fifth century BC should come as no surprise. Among the many legends about him we are interested in the one having to do with his death, which took place on Mount Etna, where he had gone to study volcanic phe- nomena from close up. The historian Diogenes Laërtius recounted how Empedocles threw himself into the crater, convinced that he was immortal, but was betrayed by the volcano that a few days later spewed out one of his bronze sandals. This ancestral desire to control the elements does not just take me back to my work as an artist, but it also reminds me of another news item. It was 1983 and the eruption of Mount Etna provoked a great flow of lava that threatened the town of Nicolosi. The volcanolo-
gists Marcello Carapezza and Franco Barberi suggested using explosives to deviate the flow of the lava’s course, and they involved the Swedish mining engineer Lennart Abersten in their plan. On 14 May 1983 an explosion broke the banks and deviated a part of the lava into an artificial canal. This daring intervention, which had never been done before, proved that their insight was good, [2] and the method began to be used in other countries as well. My work at the Brenner Base Tunnel bears witness to a series of attempts, the fruit of ideas that have been developed over the years, to achieve an image that had never been seen before, the photograph of a “blast” in the tunnel that technical, logistic, and safety requirements made practically impossible.

AD: The images in the book are the account of a performa- tive action. The shotfirer stages a long sequence of pre- paratory activities (from the tracing to the loading of the shot to the connecting of the denotator charges), which culminate in the spectacular explosion of the front of the excavation.

AB: The shotfirer/photographer relationship is based on my over ten years of research into the use of explosives. The book KA-BOOM. The Explosion of Landscape [3] is conceived as a fictional handbook on blasting theory and practice, in which the close relationship between photography and explosives is analyzed, starting from the chemistry and specifically the nitrate, continuing with the parallel industrial and technological evolution, all the way to the philosophical and conceptual implications with regards to time, to the randomness and irreversibility of a process that once it is triggered cannot be stopped and that brings with it several levels of risk. KA-BOOM taught me that the most significant and interesting part
of the work (of the shotfirer and the photographer) is the wait, the time during which the event is prepared, comprising long activities that are often repetitive in which the greatest amount of concentration is required. Each operation becomes relevant because it is needed to achieve the ultimate Acme. [4] However, my aim is not at all to tell a story or to document; rather, it is based on the need to express the performative as well as genealogical dimension of my work, even when I am not the subject of the image.

AD: The references to the myth of Prometheus are all there: fire is born from the giant, from his body and from his bowels. The natural order and Nature’s equilibrium are thus overturned. The cracks that open up in the Earth’s crust create the communication between the world above and the world below.

AB: When in 1925 the German theorist Siegfried Kracauer visited his friend the architect Gilbert Clavel in Positano, he was astonished and almost terrified. Clavel was building his home by using dynamite to excavate the rock, and using the debris to restructure the Tower of Fornillo ruin. He was digging into the depths to build his truncated pyramid on the outside, he subtracted materials and energy from the bowels of the Earth in order to elevate himself towards the sky and the gods. Clavel’s explosions are the most suitable method to come to terms with chthonic forces, to make a breach in the Earth and to connect the world above ground with the one underground. It is a pendular movement that I found to be a productive model in my journey into the Brenner Base Tunnel as well, where the mountain is excavated and part of the debris returns to the same place in the form of spritzbeton, or in the reinforced concrete models that make up the vault of the railway tunnel.

AD: The documentation of the detonations hides within a further sequence of images that shows the different attempts, both failed and successful, to record the explo- sive flash that comes from the inside of a gun barrel. The story is interwoven with the meta-story, and the mirror, which appears immediately before and after the fuses are lit, shows us a different subject, which here is not so much the thing that is represented, as much as the person looking at that same thing.

AB: The metaphor of the gun barrel is absolutely spot on with respect to the blasts in the tunnel. When the explo- sions of the front occurs, the noise is deafening, but what is most impressive is the way the air shifts, moving through the tunnel, trying to find a way out. I wondered how to place the camera close to the front and protect it from the spewing of the materials, and at first I used the expedient of the mirror, a method that is used to record nuclear explosions. Activated at a distance, the camera records the track of the detonating fuse, which serves as a flash in the dark. Through those images we can return again to mythology, or allude to photography’s ability to be both a window and a mirror. Over the course of the years, I have always made the process that leads to the realization of the final work manifest, translating it into a work in itself. However, as I said before, here I wanted to go beyond and try to take a picture (not a video frame) of a blast in a tunnel in the dark. The phases that reveal the defects are perhaps more important than the ones that follow a planned characterization, because they allow for the gradual elaboration of a method. Obviously, I will not reveal all the technical details, but I can say that the experiment was successful thanks to the application to photography of several principles of blasting theory and vice versa.

AD: Each blast corresponded to a new experiment, a chance to come close to the image that you wanted, each time perfecting the position and the timing of both the camera and the artificial lights anchored to the side walls of the tunnel. Nonetheless, in spite of the numerous attempts made and the different conditions created to check the variables involved, each shot preserved, in its outcome, a certain dose of uncertainty.

AB: There is no doubt an irrational component in trying to control a process that maintains a certain amount of randomness and uncertainty, [5] but what upholds the experiment is the design structure and the pre-vision of the final results, which are also typical of photographic thinking. What I am also interested in is the plastic and sculptural potential of the image in expressing the explosion as an ephemeral work on the modification of space. None of this would have been possible without Ghella’s generosity and that of the extraordinary people who satisfied my request, starting from the building of a reinforced concrete shelter for my camera. I think that the results achieved are a cause for satisfaction for them as well.

1. Marcello Carapezza, Molti fuochi ardono sotto il suolo. Di terremoti, vulcani e statue (Palermo: Sellerio, 2017).
2. A detailed report on the matter is available at www.youtube.com/watch?v=Idbd sJOe_nY (ultima consultazione giugno 2020).
3. Andrea Botto, KA-BOOM. The Explosion of Landscape (Paris: Bessard, 2017).
4. Acme Corporation is the name of the fictitious company that Wile E. Coyote buys his crazy inventions from.
5. According to Heisenberg’s uncertainty principle, which established the limits of the measurements of a physical system, the very act of the observation modifies the objects observed. 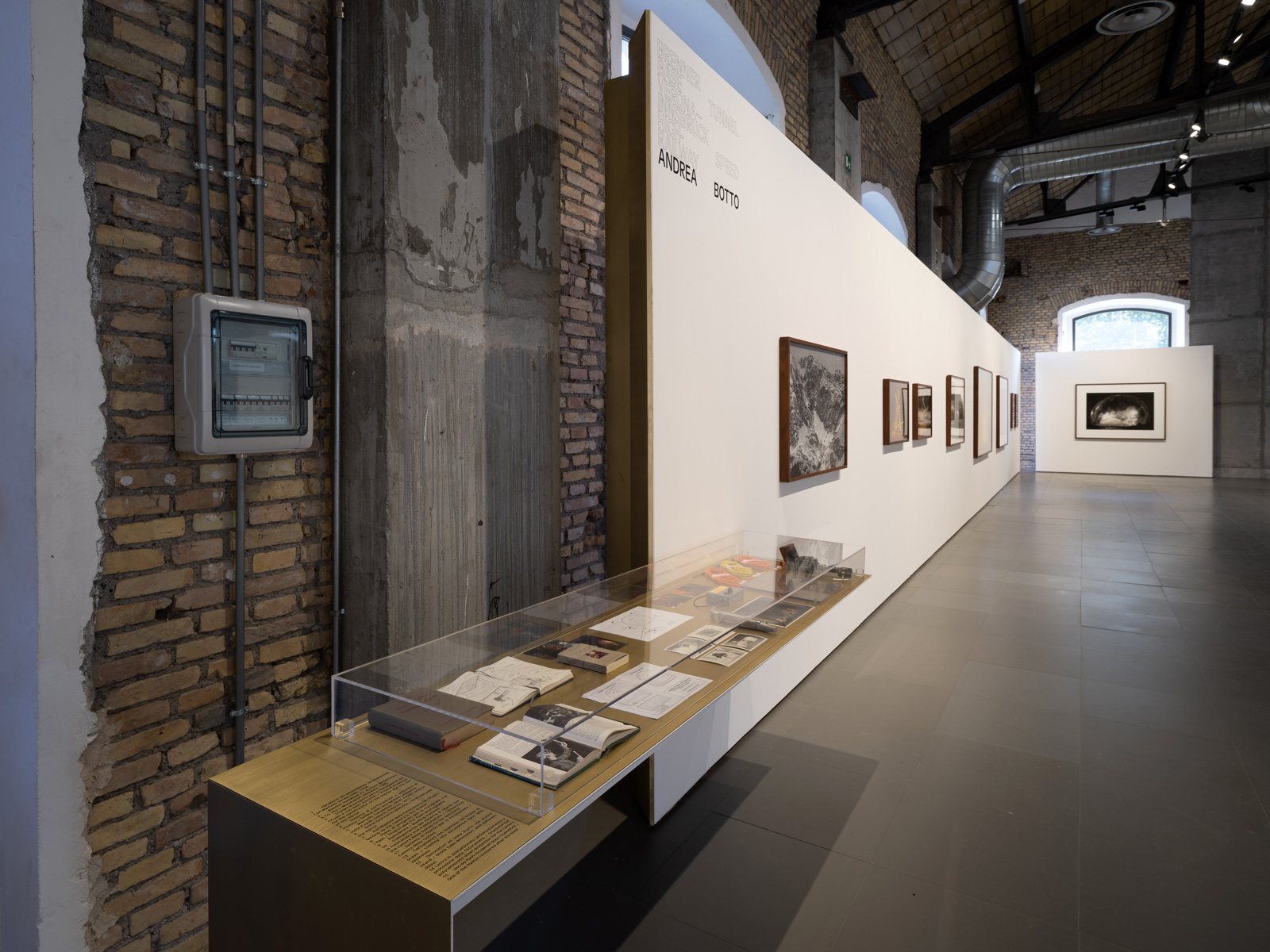 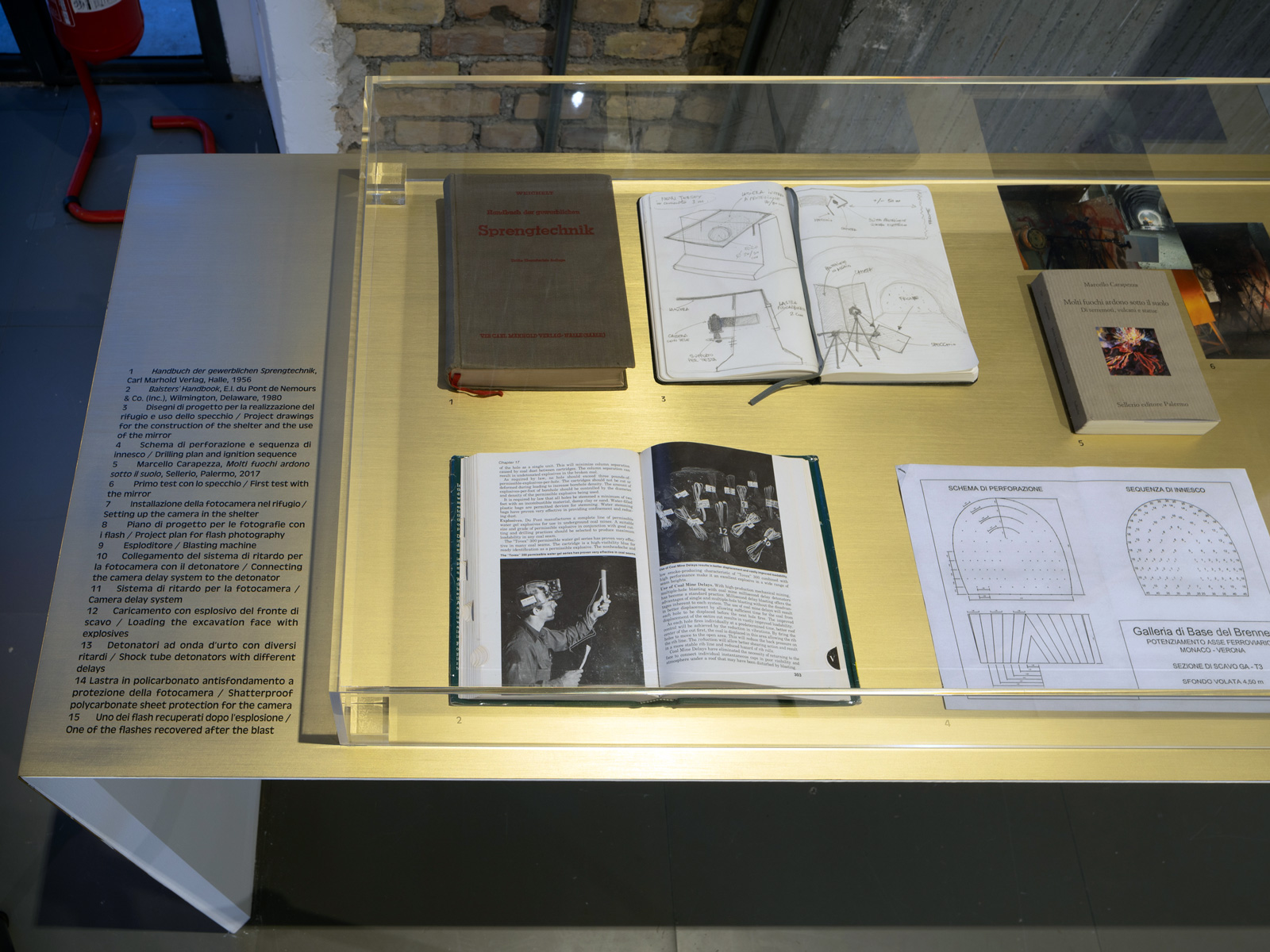 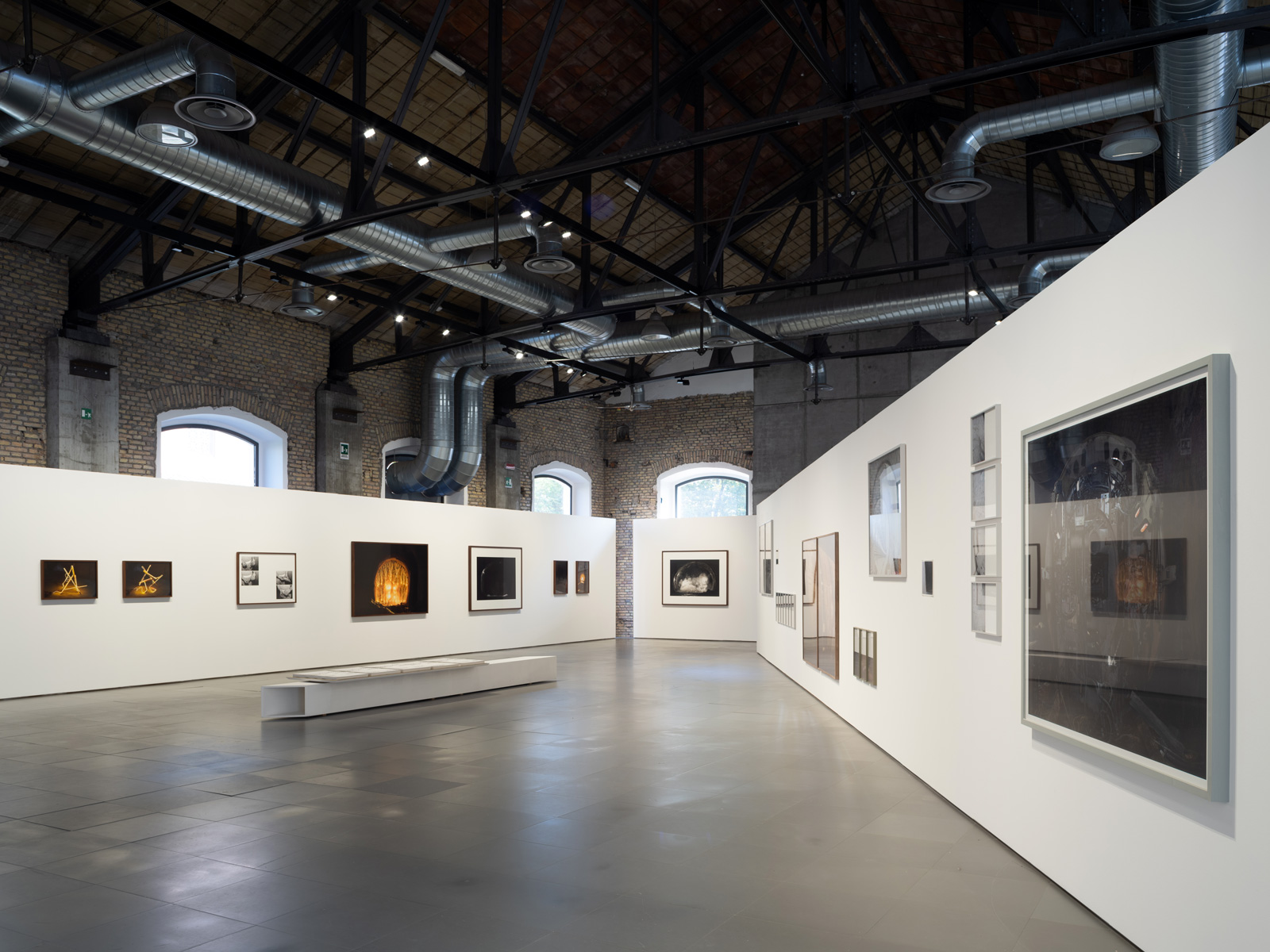 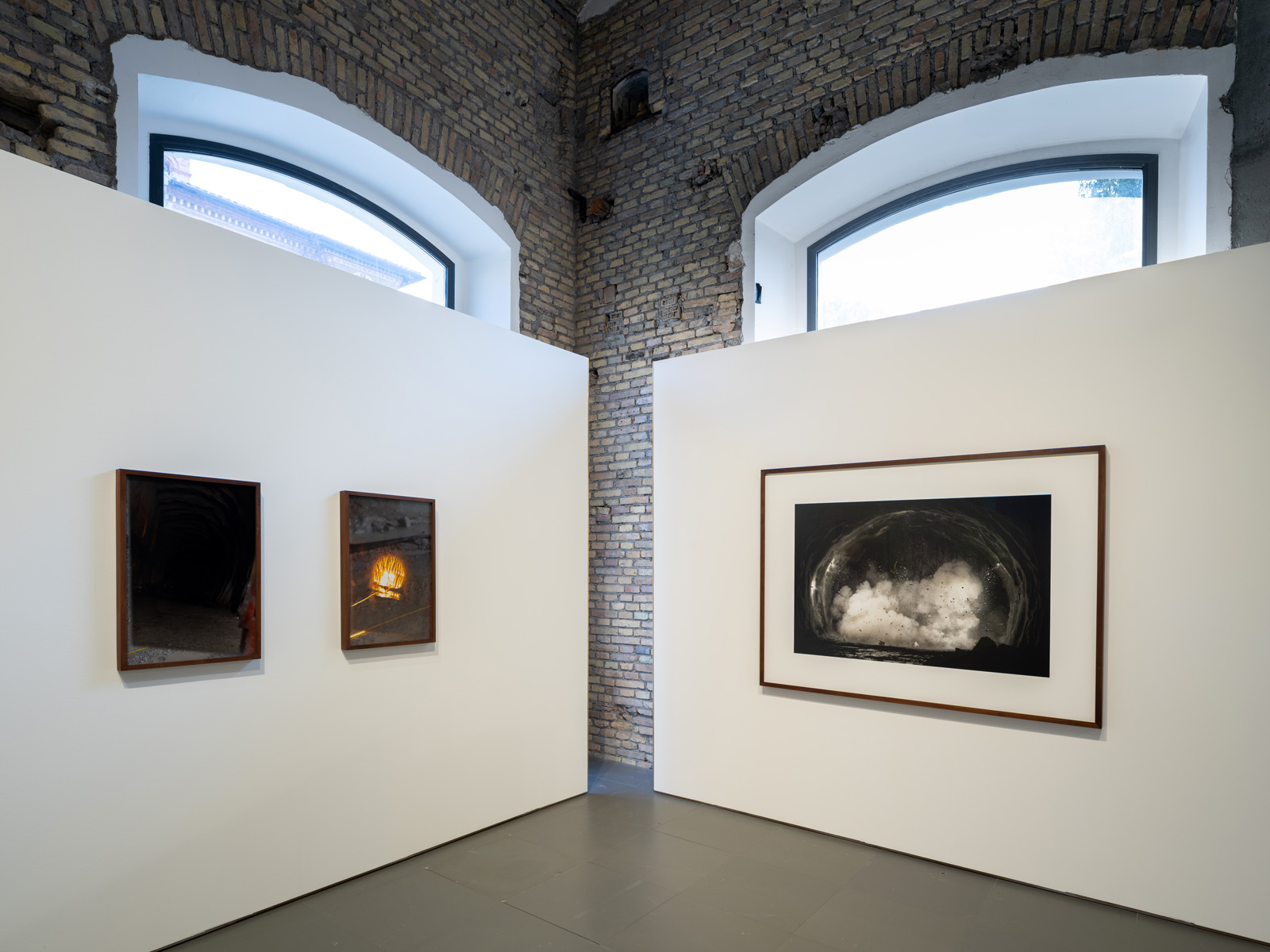 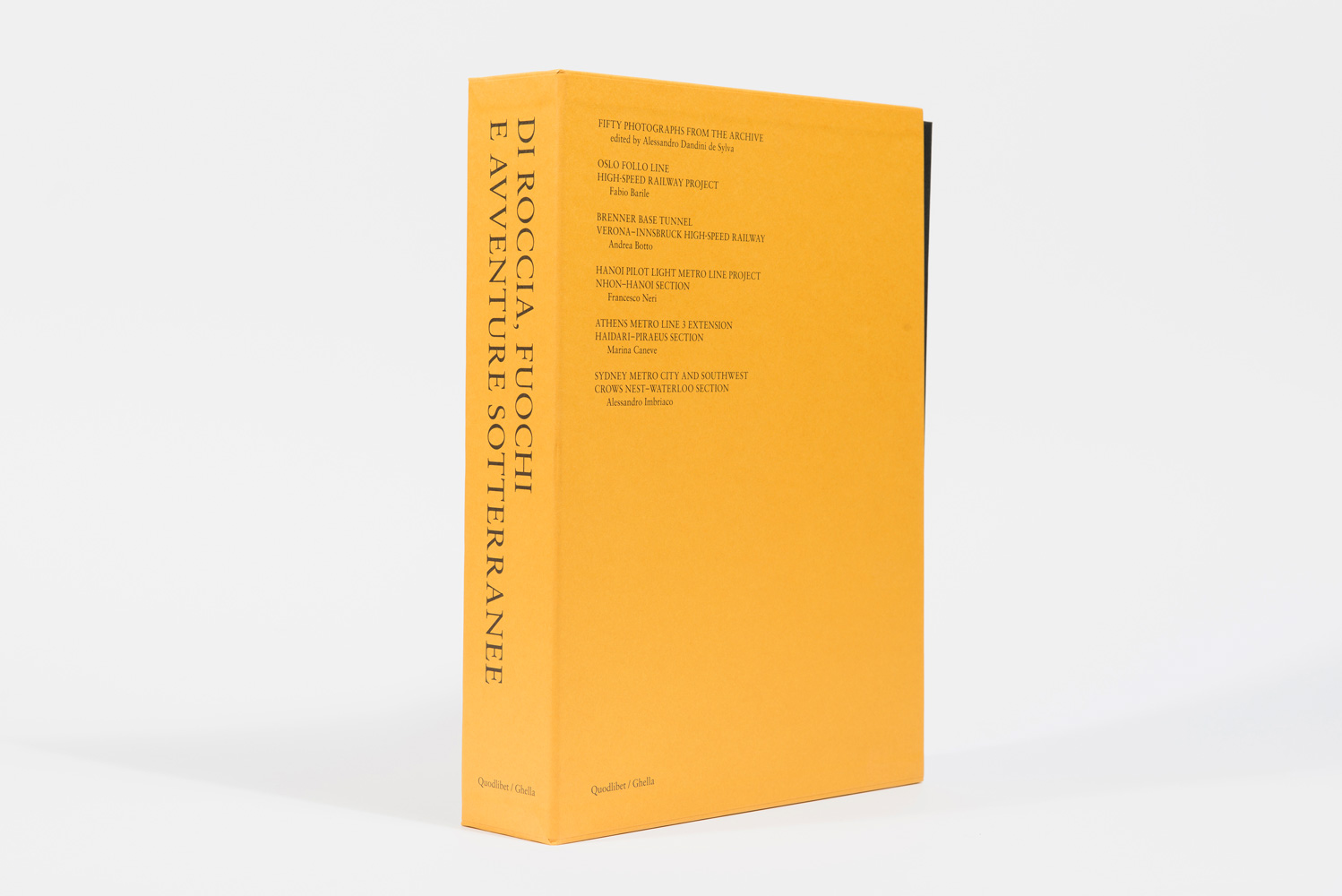